It is a bit heavier than the average adjustable stock, but that’s the least of my worries on this rifle. Only down side to the RAT is that it pulls off the tube rather easily when adjusting the LOP.

I used a RAT stock to build an AR-15 for Run-n-Gun...much to my annoyance, despite a fluted barrel and lightweight handguard, the new rifle is almost the exact weight of the one I was using before. Now, the major culprit I'm pretty sure is the Vortex Strike Eagle, but that RAT stock weighs in at 13.75 ounces. I'll be replacing it with a MagPul CTR (8.8 oz) and the LaRue grip with a basic A2 grip (another ounce +).

Depending on how that feels, the Strike Eagle may go in favor of a lighter 1-4x. Especially if I want to try going for 10k runs instead of the 5k.
Fortuna Fortis Paratus
Top

OK, I think I finally figured out how to make imgur work (Again. I have to relearn every time it seems like.) 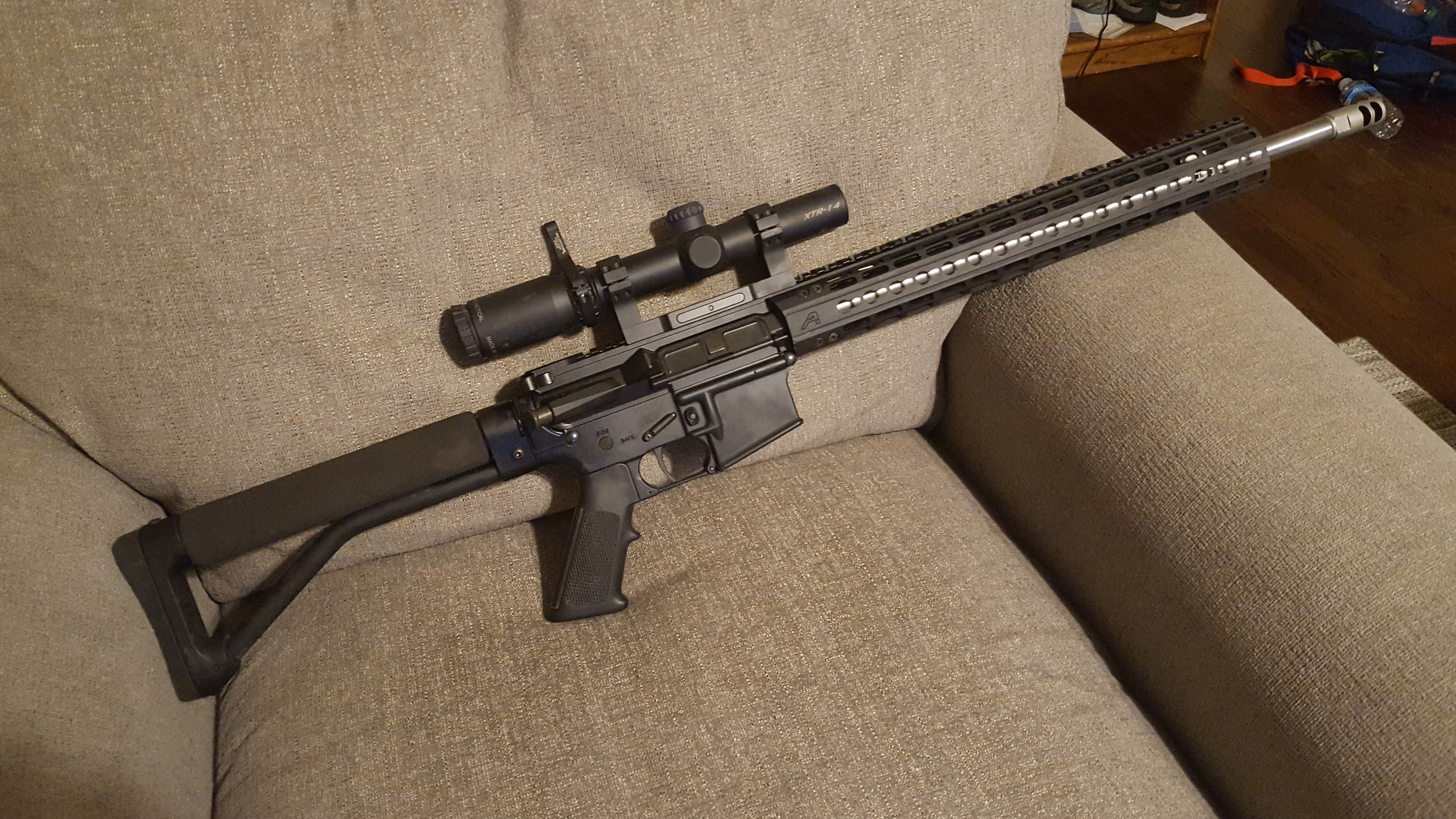 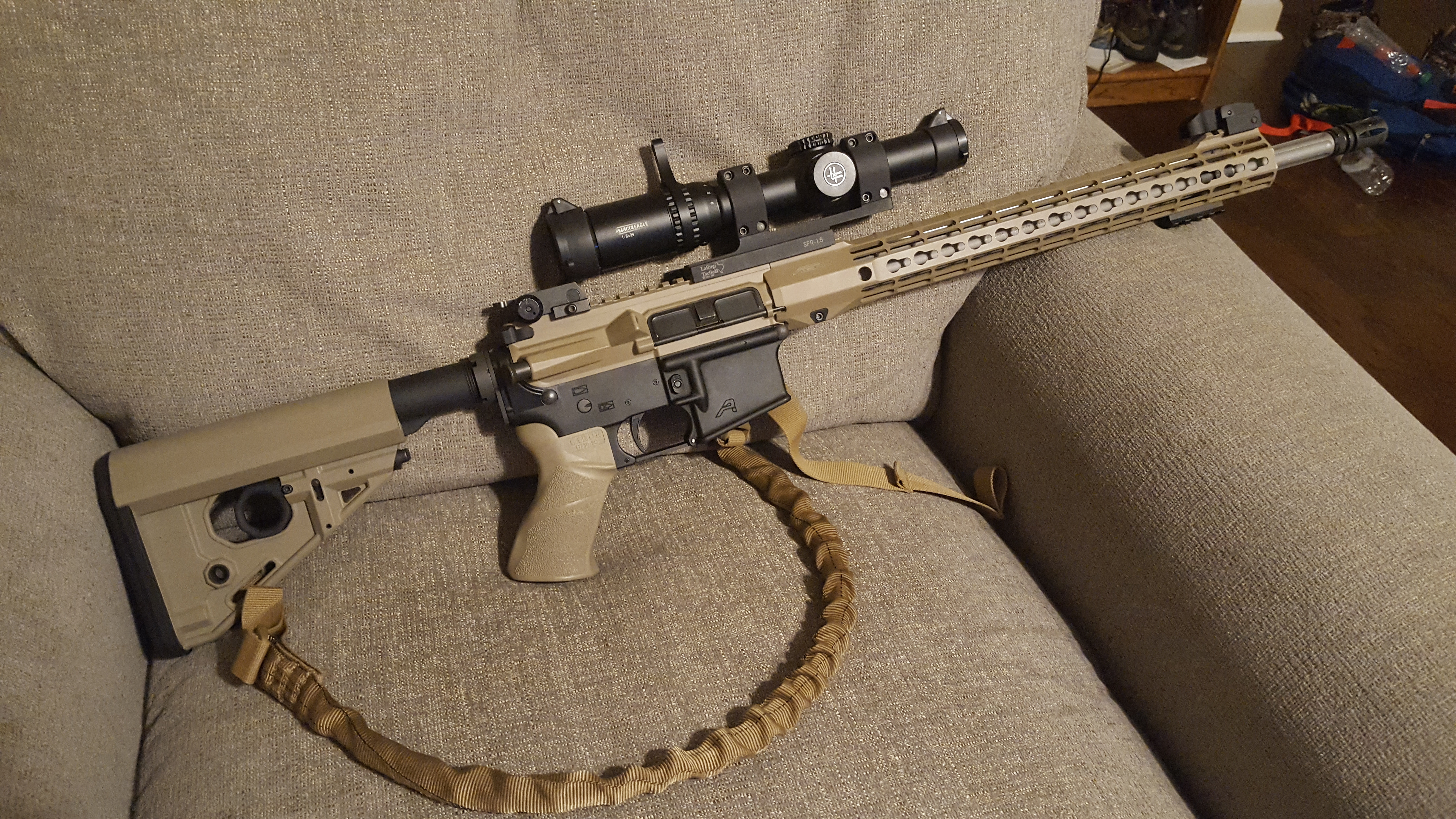 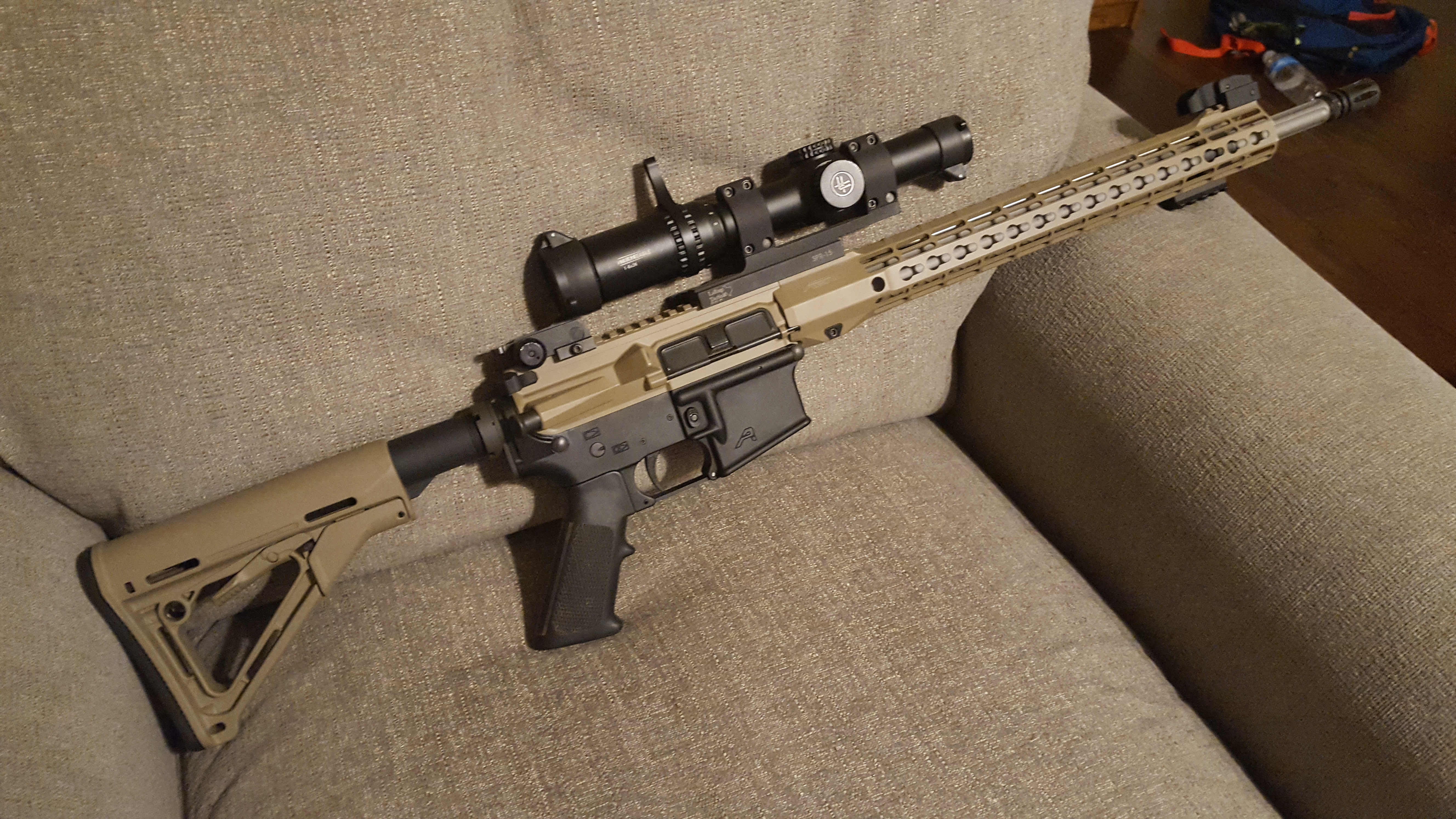 Next step is to take both scopes to work (where we have a suitable scale, which I lack at my house) and weigh them, because honestly I suspect that Strike Eagle is the main culprit in making the rifle heavy. Then it's decision time: is the extra 2x (the Burris is 1-4x, Strike Eagle 1-6x) worth the weight?
Fortuna Fortis Paratus
Top

Ready to shoot this now; installed german silver front sight blade. This was a blank that I had to contour, and file to fit the Lyman's undersize dovetail.

WTF? What is it?
Winner of the prestigious Автомат Калашникова образца 1947 года award for excellence in rural travel.
Top

That is an SWD M11/Nine converted to 5.56 by way of a Lage upper receiver.
The avalanche has already started. It is too late for the pebbles to vote.
Top

I have had most of the parts for this for a while, but I finally got around to putting it together and also found a good deal on another Nikon scope like I have on my other 300 Blackouts.

Main reason I ended up building this was I found a 16" AAC barrel in .300blk being clearanced on Numrich's website for a little over $100 (normally about a $400 barrel). Figured I would get it and eventually have it chopped back for my spare SBRed lower, but later I decided to build it at 16" instead. The parts are mostly Aero other than the AAC barrel, flash hider, and Daniel Defense stock. I may get an extended charging handle and a better trigger at some point if I find those items on sale. Probably not going to bother with BUIS due to the fixed scope mount and the fact that it's just a spare rifle.

Upper and lower are both their M4E1 series. The upper mounts the rail/handguard direct to the upper forging so you don't have to worry about timing of the barrel nut or anything like that, and if you are using a handguard with full rail on the top, you don't get that double wide spot between the slots like you usually see. Probably other features too. The lowers are nice because the trigger guard is part of the forging, so no roll pin there, and no roll pin for the bolt release either since it uses a special threaded pin. The pin comes with the lower but if you want a spare, buy Aero's LPK because there will be one in there, too. There's also the tension screw under the grip you can use to tighten up fit with the upper, which eliminates any need for a wedge.

Only reason I bought the DD stock was it has an overmolded cheek piece similar to the Hogue stock that I really like, but it also has a rotation limited sling swivel, which is a feature I think is important, and the Hogue doesn't have that. But having bought it, I don't really care for the DD stock. It works, and I don't plan to replace it, I just wouldn't buy another one. It's almost too tight on the buffer tube, and the recoil pad setup is borked.

I also can't recommend the Aero scope mount. I like most of Aero's stuff a lot, but because of the way the rings on this mount tighten, the scope will rotate clockwise as the screws are torqued. So you may think you have it level, but you really don't because it is going to rotate on you. You have to guess at how far counterclockwise out of level to start by trial and error. And if you're using a dab of blue loctite on the screws, you are racing against the cure time. Now that I have it in place I will leave it there, but if I ever have a reason to remove the scope I am probably going to replace the mount with something else that is less stupid.

My original plan had been to move the Nikon 1.5-6 scope and Bobro mount from my SBR to this rifle and get a different optic for the SBR, but then I found the same scope on sale for less than half price (still more than I paid for the first one) and now my blackouts all use the same scope and reticle. It's not really a "tactical" scope but it is good quality and has clear glass. Probably not worth the $700 MSRP but it's a good scope if you can find it on sale.

Went with their Quantum upper because I didn't really see the need for rail running all the way out, and it was less expensive. It does have a short section in the front for a BUIS that I am not going to add.
Cognosce teipsum et disce pati So...I now have a pink AR. And no wife or daughter to blame for it.

Aside from the stock, fore end, and pistol grip, it's a standard (blem) PSA Freedom Rifle 16" carbine kit built on a Tennessee Arms polymer lower. Rear sight is Midwest Industries. Stock is an Exos Defense TI-7, and the pistol grip came with it. Fore end is MagPul.

It all started with the stock. I picked it up off the prize table at the FN-USA 3-gun match back in 2015. I didn't realize it was "kitty pink" until I got it home - there was a gift certificate and some other items rubber banded to the box, and they covered the sticker that showed the stock color. Oops.

Fast forward to fall of 2016. I was late to the pre-election panic buying party, and I ended up putting in an order from TN Arms. My then-wife wasn't particularly interested in a pink AR, but I figured that I already had a pink stock, so why not add a pink lower to the order?

The parts then sat around for over two (almost three years), during which time I got divorced. A few months back, Primary Arms was having a MagPul sale, so I figured I might as well get the pink fore end.

Then I finally picked up a blem carbine kit from PSA and put it all together. Pink AR. I'm actually thinking of using it as a truck gun. I figure in the highly unlikely event that I get caught in a very bad place and have to do some social re-engineering, it might be useful to be able to tell the 911 call taker "Tell the responding officers that the guy with the pink gun is a good guy."
Fortuna Fortis Paratus
Top

You, sir, are either a genius master of rationalization, or just a plain genius. I am not sure which.
Cognosce teipsum et disce pati

“A man walks down the street with that rifle, people know he’s not afraid of anything.”
...even before I read MHI, my response to seeing a poster for the stars of the latest Twilight movies was "I see 2 targets and a collaborator".
Top

Return to “Guns and Shooting”